The Book of Hebrews is a Commentary on Genesis, but there’s more? 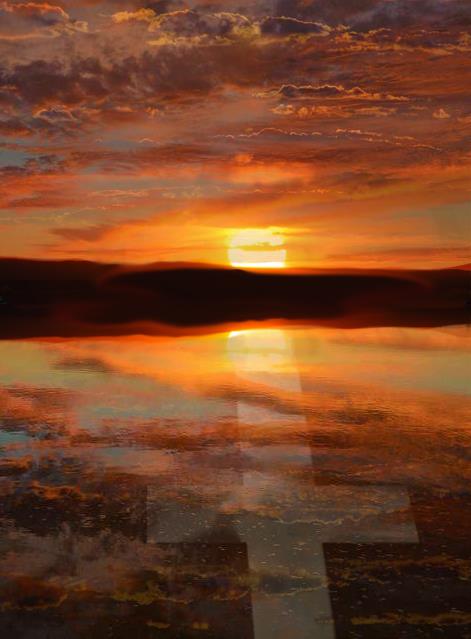 This is a guest post, by Dr. J. David Pitcher

“The Rank of the Messiah”

Both books of Hebrews in the New Testament and Genesis in the Hebrew Scripture have attracting themes that hold the interest and attention of the reader.

Just as Moses’ perspective connects the God of Creation to the God of the Covenant, Paul’s perspective identifies the Messiah as God of Creation and of the New Covenant. The sunrise depicted here reflects the turning point of all history on the surface of the waters it rises over though it is not evident in the sky of the sunrise.

Paul wrote in Colossians 1:16 regarding the pre-Incarnate Messiah’s involvement at the dawn of history:

“He is the image of the invisible God, the firstborn of all creation. For by him all things were created in the heavens and on the earth, visible things and invisible things, whether thrones or dominions or principalities or powers. All things have been created through him and for him. He is before all things, and in him all things are held together.” (Colossians 1:15-17, World Messianic Bible)

Isaiah also foretold salvation would come from the Creator in his prophecy regarding Cyrus:

“I have made the earth and created man on it. I, even my hands, have stretched out the heavens; and I have commanded all their army.” (Isaiah 45:12, World Messianic Bible)

“For the Lord who created the heavens, the God who formed the earth and made it, who established it and didn’t create it a waste, who formed it to be inhabited says: ‘I am the LORD; and there is no other.’” (Isaiah 45:18, World Messianic Bible)

“”I have sworn by myself, the word has gone out of my mouth in righteousness, and will not be revoked, that to me every tongue shall take an oath. They will say of me, ‘There is righteousness and strength only in the LORD.’” (Isaiah 45:23-24, World Messianic Bible)

Paul quoted this particular prophecy in Isaiah twice regarding his identifying the Messiah as Yeshua:

“For it is written, ‘As I live’ says the Lord, ‘to me every knee will bow. Every tongue will confess to God.’” (Romans 14:11, World Messianic Bible)

“Have this in your mind, which was also in Messiah Yeshua, who, existing in the form of God, didn’t consider equality with God a thing to be grasped, but emptied himself, taking the form of a servant, being made in the likeness of men. And being found in human form, he humbled himself, becoming obedient to the point of death, yes, the death of the cross. Therefore God also highly exalted him, and gave to him the name which is above every name, that at the name of Yeshua every knee should bow, of those in heaven, those on earth, and those under the earth, and that every tongue should confess that Yeshua the Messiah is Lord, to the glory of God the Father.” (Philippians 2:5-11, World Messianic Bible)

In Hebrew, the name of Yeshua means “The LORD is salvation.”

Hebrews is a Midrash of Genesis. 483 words were taken in sectional order from the Greek translation of the Hebrew Scripture, the Septuagint and placed in sectional order in Hebrews. Specifically, Hebrews 1:1-4a is a Midrash of Genesis 1:1-25. Seven Greek words are common to both the Midrash and the Source Text and are used as the framework of the Midrash. 69 Greek words are in this section of Hebrews and seven words with a total of eight uses (the word “all” is used twice) for an 11.6% usage rate from this first section of Hebrews drawn out from this first section of Genesis.

The same Greek word used in the Septuagint by those 72 Jewish scholars about God’s placement of the sun, moon, and stars, “set” (ethakkeh) was used by Paul (“appointed”) to describe Yeshua the Messiah as heir of all things. Paul connects Hebrews with Genesis stating through the Son of God he “made the worlds”, is the “radiance of his glory and the express image” of God’s person, “upholding all things by the word of his power” and “purged our sins”.

Paul used three words, “in many parts”, “in various ways”, and radiance” not used in any other place either in the Septuagint (LXX) or the New Testament illustrating the uniqueness of God’s message to mankind. The word “in many parts” means “not all at once” and indicates the 3,500 year time from Adam to Malachi. Paul’s immensely creative vocabulary in Hebrews 1:1-4a dramatically demonstrates God’s loving desire to communicate with mankind, both with Creation and through his Word recorded in Scripture.

In Genesis, the phrase “In the beginning” implies there will be a “last of days”. Paul’s identification of Yeshua the Messiah as “heir of all things” in Hebrews also alludes to the last of days with the idea of inheritance.

Paul’s use of “express image” is the Greek word from which the English word “character” is derived from. Yeshua the Messiah holds the character of God.

Paul ascribes to Yeshua the Messiah a rank that he is entitled to of the profoundest regard. The Greek word translated “express image” is only used in the New Testament in Hebrews 1:3 and likewise is only used in the Septuagint once in Leviticus 13:28. It is a “hapax legomenon iterum”, the first of many in Paul’s Midrash.

Note that the English translation of the Hebrew of Leviticus 13:28 within the law of leprosy does not indicate the word “express image”:

“If the bright spot stays in its place, and hasn’t spread in the skin, but is faded, it is the swelling from the burn, and the priest shall pronounce him clean, for it is the scar from the burn.”

“But if the shining forth should stay in its place, and should not be diffused in the skin, but it should be faint, it is a discoloration of an inflammation, and the priest should declare him cleansed; for it is an effect of an inflammation.”

That “shining forth” (augazon) in Leviticus 13:28 is explained by Paul in 2 Corinthians 4:4 (“dawn”) to be the “light of the Good News of the glory of Messiah, who is the image (eikoneh) of God”:

“Even if our Good News is veiled, it is veiled in those who are dying, in whom the god of this world has blinded the minds of the unbelieving, that the light of the Good News of the glory of Messiah, who is the image of God, should not dawn on them.” (2 Corinthians 4:3-4, World Messianic Bible)

Note also within the contextual meaning of “express image” from Leviticus 13:28, it is associated with the declaration of a person to be “cleansed” by a priest. Note how Paul tied the word of God in the ancient past to the work of God in the present with provision of Yeshua the Messiah. Using the word “express image” Paul links the work of the priest through the Law with the very priestly character of Messiah, to declare cleansed. Finally Paul wrote that Messiah “purged” our sins.

The opening statements of both Genesis and Hebrews are majestic, identifying the Creator and explaining the origin of the world. The Midrash of Hebrews with its Source Text Genesis connects the past and present work of God with his future work.

Yeshua the Messiah created all things and saw that they were good, knowing full well that one day his purging of sin and declaration of those bowing to him as cleansed would be particularly and brutally painful to him leading up to and as he hung upon the Cross.

Have you bowed your knee to Yeshua the Messiah? Why wait any longer? Bow now in his mercy rather later in his judgment. He is faithful and righteous to forgive sin as John wrote:

“If we confess our sins, he is faithful and righteous to forgive us the sin and to cleanse us from all unrighteousness.” (1 John 1:9, World Messianic Bible)