You know you want to know God better than you do now. This is the Bible version that will help you most. 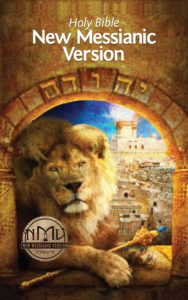 You want to know God better

The New Messianic Version of the Bible is becoming increasingly popular among believers in Jesus because it puts back into an English language Bible some significant things that have been left out of other versions.

The New Messianic Version, challenges both Jews and Christians to see that the whole Bible is Jewish.

It restores the names of people and places to their “Jewish” pronunciation, and it translates every name of people and places in-line with the text, so that it reads much like an “Amplified Bible.” Additionally, Author Tov Rose says, “Today, Jewish people and Christians alike suffer a similar kind of blindness concerning the nature and person of God: Because of this, they do not know their God as they should. There is a secret hidden in your Bible, and this is the only Bible that reveals it.”

This groundbreaking work answers the one question most Christians and Jewish people alike get wrong, “Who is the God of the Hebrew Bible?”

Again, Tov, “If you said, ‘God the Father’ then you got it wrong, and I’m going to prove it to you.

For example, in the New Testament book of John 6:46 Yeshua (Jesus) says, ‘No man has seen The Father…’ well then,” says Tov, “who have people seen?”

This Version clearly shows you who the “author” really is, and it isn’t God the Father.

The New Messianic Version clearly tells you which Old Testament Names of God represent Father God, and which others represent The Son of God–an ancient teaching understood by the New Testament authors and other 1st Century followers of Messiah.

Tov again, “For example, just look at Isaiah 44:6: ‘Thus says the Lord, the King of Israel and his Redeemer, the Lord of hosts: “I am the first and I am the last, And there is no God besides Me.”‘ Then look at the New Testament’s book of Revelation 22:13 “I am the Alpha and the Omega, the first and the last, the beginning and the end.” Obviously, there is something more to our theology that is clearly misunderstood among many of today’s Christians and Jews alike. “Yeshua (Jesus) said unto them, ‘Verily, verily, I say unto you, Before Abraham was, I AM.'” (John 8:58).”

Jews are challenged by the implication that the Tanakh is an incomplete Bible without the New Testament understanding that Yeshua (Jesus) is the God of the Hebrew Bible. Christians are challenged with the fact that they are joined to the Jewish people through faith in the Jewish Messiah, Yeshua (Jesus). Christianity can only be truly understood only from a Jewish perspective, hatred of Jewish people (aka: Anti-Semitism), can have no place with followers of Messiah. In short, The New Messianic Version restores the Jewish flavour and understanding of those first generation followers of Messiah Yeshua (Jesus).

ARE YOU LOOKING FOR THE PHYSICAL BOOK? CLICK HERE!

There are no reviews yet.