Fairy stories such as Beauty and the Beast and Rumpelstiltskin can be traced back thousands of years to prehistoric times, with one tale originating from the bronze age, academics have revealed.

Using techniques normally employed by biologists, they studied common links between 275 Indo-European fairy tales from around the world and found some have roots that are far older than previously known, and “long before the emergence of the literary record”.

While stories such as Beauty and the Beast and Rumplestiltskin were first written down in the 17th and 18th century, the researchers found they originated “significantly earlier”. “Both tales can be securely traced back to the emergence of the major western Indo-European subfamilies as distinct lineages between 2,500 and 6,000 years ago,” they write.

These stories have been told since before even English, French and Italian existed

In the 19th century Wilhelm Grimm, of the Brothers Grimm, believed many of the fairy stories they popularised were rooted in a shared cultural history dating back to the birth of the Indo-European language family.

But later thinkers challenged that view, saying some stories were much younger, and passed into oral tradition having first been written down by writers from the 16th and 17th centuries.

Da Silva told the Guardian that the origin of folk tales was one of the “biggest mysteries” in folk tale studies, with its reconstruction “often frustrated not only by difficulties in defining the genre but also as a result of the rich interplay between oral and written traditions”. The new method of mapping the stories through common languages and geographical proximity worked, “because in oral tradition, folk tales are transmitted through spoken language, so a correlation might be expected; and also because both languages and folk tales are transmitted from generation to generation.”

Tehrani said their study agreed with Grimm’s theory: “Some of these stories go back much further than the earliest literary record and indeed further back than classical mythology – some versions of these stories appear in Latin and Greek texts – but our findings suggest they are much older than that.”

Analysis showed Jack and the Beanstalk was rooted in a group of stories classified as The Boy Who Stole Ogre’s Treasure, and could be traced back to when eastern and western Indo-European languages split – more than 5,000 years ago. Beauty and the Beast and Rumpelstiltskin to be about 4,000 years old. A folk tale called The Smith and the Devil was estimated to date back 6,000 years to the bronze age. 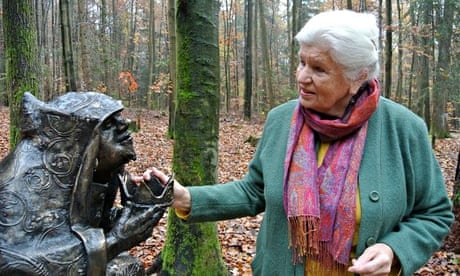 The story, which involves a blacksmith selling his soul in a pact with the devil in order to gain supernatural ability, then tricking the evil power, is not so well known today, but its theme of a Faustian pact is familiar to many.

The study employed phylogenetic analysis, which was developed to investigate evolutionary relationships between species, and used a tree of Indo-European languages to trace the descent of shared tales on it, to see how far they could be demonstrated to go back in time.

Tehrani said: “We find it pretty remarkable these stories have survived without being written. They have been told since before even English, French and Italian existed. They were probably told in an extinct Indo-European language.”

Da Silva believes the stories endure thanks to “the power of storytelling and magic from time immemorial”.

“Besides, the motifs present in fairytales are timeless and fairly universal, comprising dichotomies such as good and evil; right and wrong, punishment and reward, moral and immoral, male and female,” she added. “Ultimately, despite being often disregarded as fictitious, and even as a lesser form of narrative, folk tales are excellent case studies for cross-cultural comparisons and studies on human behaviour, including cooperation, decision making, [and so on].”

The author and academic Marina Warner, who has written a history of fairytales, called the paper “fascinating”. “What’s interesting to me is it shows how deeply this creative power of the imagination lies in the human being, how it’s about making sense of your world by inventing narratives that resist its difficulties,” she said. “In the case of The Smith and the Devil, it’s a cunning tale – the trickster tricked, showing a very ancient version of that defiance of difficulty. That capricious chance will play tricks on you, but you, with cunning, will be able to resist that. It’s a kind of joke the audience shares to feel a little better.”

Beauty and the Beast, or The Animal Bride, shows a similar kind of imagining, she added. “It’s making sense of our relationship with the natural world – eliminating the threat. A beast figure marries a woman, and then the stories take different turns; in one she kills him, in one she finds he turns into a man when she kisses him.”

Press Association contributed to this report.

Share | Tweet | Share | Pin It | +1 | print | email
Category: fairy tales
Disclosure of Material Connection: Some of the links in the post above are “affiliate links.” This means if you click on the link and purchase the item, I will receive an affiliate commission. Regardless, I only recommend products or services I use personally and believe will add value to my readers. I am disclosing this in accordance with the Federal Trade Commission’s 16 CFR, Part 255: “Guides Concerning the Use of Endorsements and Testimonials in Advertising.”