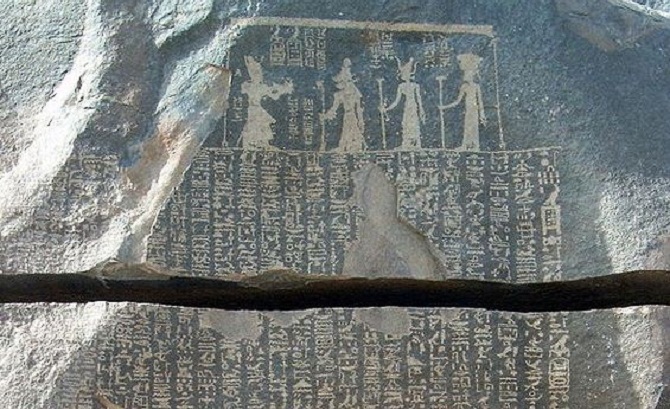 Just get your head into this puzzle, .

And then after that I’ve got a very, very special deal for
you, if you are interested, which is not available to the
public, but reserved for you strictly as a valued
subscriber.

And what was the puzzle? I tell you, it just knocked
me over! Well, the occasion was my first expedition
– into the Amazon.

FORGOTTEN HISTORY HIDDEN IN THE JUNGLE

Yes, indeed. It was an afternoon never to be forgotten.
That day, you see, I had the unexpected opportunity to
examine an ancient metal sheet, or plaque, engraved with
Egyptian hieroglyphics.

The weird thing was, it had lain hidden away in, of all
places, this South American Amazon jungle. It had been
here for thousands of years.

It seems that long, long ago traders from a faraway land
across the Eastern Sea sailed up the Amazon river system.
And this was one of the items they traded to the ancestors
of today’s primitive Amazon villagers, who once lived in
shining cities.

Now that’s very embarrassing for mainstream theories. Do
you see the significance? Not only did many of today’s
primitive tribes have a civilized origin, but people over
the whole world were trading with each other!

The mind boggles at forgotten history…

As a matter of fact, the native name for the Amazon is
“Solimoes”.  It is the same as Soliman, or Solomon, and
is suggestive of the biblical claim that the ships of
Kings Solomon and Hiram of Tyne made voyages lasting
three years, to a secret destination.

Semitic names are rather common in the Amazon Valley.
And many Phoenician inscriptions have been discovered.

Just before nightfall, I was reclining in a corner of
the house when something happened to quite startle me.

A man with black, rotten, teeth and war paint and
brilliant-coloured feather headdress, tight cords
around his neck, and sticks through his ears, rounded
the corner of the house carrying a lethal weapon on
this shoulder and appeared suddenly at the door.

I looked up and he was glaring down at me.

A shudder went down my spine.  The war paint, poison
darts and blowpipe screamed out that he was a killer.

Not overly friendly, I concluded.  We had better be
careful.

Fortunately, I had earlier given one of the young
village boys a balloon and he had become quite
proficient at blowing it up.

So now I felt in my bag and drew out a balloon for
this man.

He squinted at it, stuffed it into his mouth to chew,
pulled it out, fiddled with it, and looked very
puzzled.  Then his son came to the rescue.

Soon this fierce warrior was prancing around the
yard, showing off to his family how clever he was,
giggling with delight as he blew it up and let the
air scream out.

Oh, yes, NOW he was friendly to us.

HOW TO SHRINK A HEAD

Head shrinking. The procedure was as follows:

For a week before a head-hunting raid, the men of
the household assemble in the hut every night.

They develop a plan of attack and each of the men
exhorts the others to fight without fear and not to
abandon comrades.

They place great faith in visions in extravagant
color which they get from a drug they drink, as to
how the raid will succeed.

The woman remain at home, singing and performing
ceremonies to increase the chances of victory, but
not knowing if they will ever see their husbands
again, unless, perhaps, in miniature.
The whole gruesome event was demonstrated to me.
I shall describe it to you as I saw it.

Approaching the enemy house, the attackers have as
their main purpose to slaughter as many of their
opponents as they can before reinforcements can be
summoned by a signal drum.

The invaders must approach cautiously, because the
enemy will have fortified their house by pitfalls
covered over and containing sharp spikes.

Spring-set weapons may also have been installed on
the trail in such a way that a mere touch will
release a multiple spear, driving as many as 12
one-foot-long wooden spikes through the intruders
body.

Ultimately the showdown comes.  But before the
defenders come out to fight or flee, they pause long
enough to hold a dance ceremony in the doomed hut,
using a special flute made from the leg bone of a
jaguar.  Extreme brutality follows.

The murder accomplished, the invaders pick up the
bodies and cut off the heads.

Women are always subject to capture.  But older women,
filled with hatred for the attackers, are likely to
make poor wives.

The victorious warriors hurry away from the scene,
dripping with blood, and with the heads dangling at
their backs.

Hatred, fear and blood lust now give way to a mood
of triumph, made more gratifying by the opportunity
to perform indignities upon the enemy head.

Firstly, the victor has tobacco juice forced up his
nose to protect him from the spirit of the slain
enemy.

Then come rituals aimed at mastering the dead man’s
soul.

Shrinking begins by cutting the scalp up the back of
the head far enough to peel it off the skull.

Special care is taken to trim the inside of the face
away from the bones and from the cartilage of nose.
When removed, the face and scalp hang limp.

The skull is disposed of then the remainder of the
head is held by its long hair, into a bowl of
boiling water, into which are mixed herbs.

After some two hours of cooking, the skin is thick,
rubbery and pale yellow.  It is cooled on a stick.

A ring of vine is made to fit the final size of the
shrunken neck opening.

The scalp is then sewed up.

To further shrink the skin and remove fatty tissue,
several small stones are heated.  They are inserted
through the neck hole and separately in the head
rolled around.

The heat of the stones draws in the outside of the
head causing it to shrink.

While this is occurring, a man skilfully kneads the
face of the shrinking head with his fingers in much
the same way as a person would mould a model out of
plasticine.  This helps to preserve the natural shape
of the face.

After a certain time when the head was much smaller
the hot stones are tipped out and replaced with hot
sand.  The head is rotated, with the hot sand being
replaced from time to time.

Between treatments, the face is carefully moulded.
Some of the hair is plucked and particular care is
taken to keep the eyebrows in proportion to size of
head.

The head is finally about a quarter of the natural
size, about as large as a small orange.

Next, a loop is passed through a hole in the top
and tied to a stick on the inside so that the head
can be hung up.

Then all the holes in the head are sealed shut
either by using skewers or by sewing.  It is
believed that inside the head is the spirit of the
dead person.  If that spirit could be trapped
inside by closing off all the holes then the new
owner of the head, the man who has shrunk it, will
possess this extra strength in addition to his own,
in time of battle.

Finally, the head is dyed black with charcoal, and
smoked, and polished.  Much as any piece of
leather, until it is quite hard.

Even the ears, with lobes pierced, are perfect
miniatures of the original.

Sometimes, strings about 15 inches long are
suspended from lips.

The new owner will dance and sing to the shrunken
head while he holds it aloft on top of a pole.

It takes about twelve hours to clean and shrink a
head, then about eight hours more to smoke it.

Back in the civilised world, on the coast, fake
shrunken heads are sold.  However, a genuine one
will have long hair ….. the lips sewn or pinned,
and all facial hair removed except eyebrows, skin,
black-smoked and polished.