“Through ‘The Oldest Midrash’ Can We Prove that the Apostle Paul Went to Mount Sinai?”, by Dr. John David Pritcher, Jr, MD 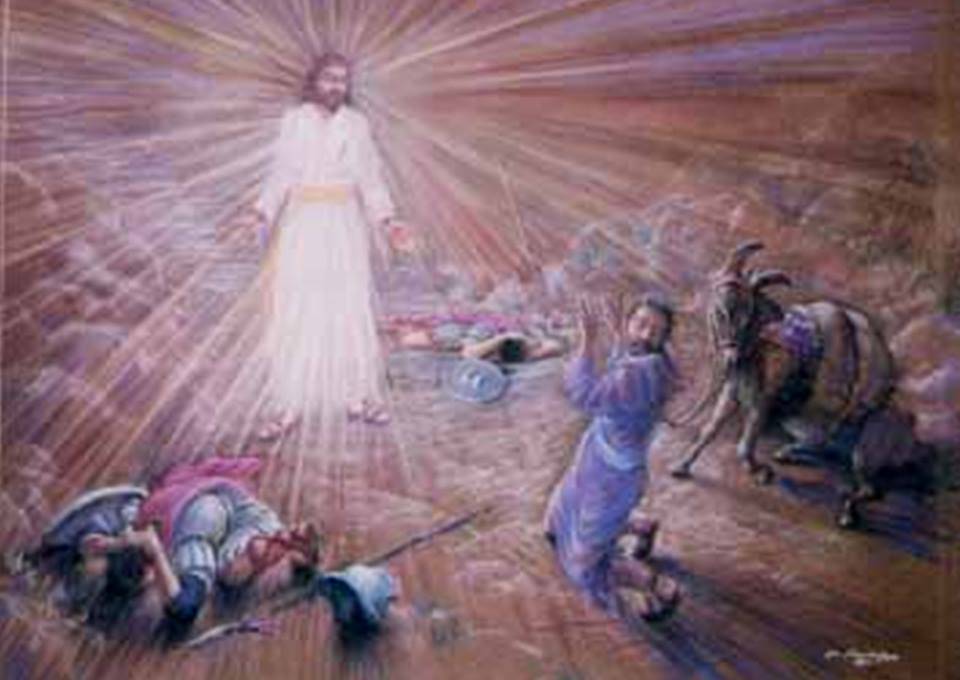 Tradition (1) has it that the Apostle Paul went to Mount Sinai like Moses and Elijah (1 Kings 19:5-13 just before he anointed Elisha with his sheepskin mantle; see footnote 2 regarding that mantle) before him. Is it true and can we prove it through the Apostle Paul’s Midrash that is present in six of his New Testament letters?

In a word the answer is “Yes!” but let me set it up for you. Perhaps no account is more well-known than his conversion. I’ve enclosed a chalk drawing and initial B/W sketch from my late friend L. Henry (Hank) Jones depicting that event on The Road to Damascus.

We know more about the Apostle Paul than any other writer of the Midrashim. He wrote 14 of the 27 books of the New Testament but much of what we know about him come from Luke the physician’s account in the New Testament book of Acts. The first account of his conversion is in Acts 9 after which he was healed of blindness through Hananiah (Ananias) and afterwards proclaimed Yeshua (Jesus) the Messiah, the Son of God.

“But Saul, still breathing threats and slaughter against the disciples of the Lord, went to the high priest and asked for letters from him to the synagogues of Damascus, that if he found any who were of the Way, whether men or women, he might bring them bound to Jerusalem. As he traveled, he got close to Damascus, and suddenly a light from the sky shone around him. He fell on the earth, and heard a voice saying to him, “Saul, Saul, why do you persecute me?”

The Lord said, “I am Yeshua, whom you are persecuting. But rise up and enter into the city, then you will be told what you must do.”

The men who traveled with him stood speechless, hearing the sound, but seeing no one. Saul arose from the ground, and when his eyes were opened, he saw no one. They led him by the hand, and brought him inot Damascus. He was without sight for three days, and neither ate nor drank. (Acts 9:1-9, Messianic English Bible)

The second account is in Acts 22:6-16 when arrested in Jerusalem and he addresses the crowd.

“As I made my journey, and came close to Damascus, about noon, suddenly a great light shone around me from the sky. I fell to the ground, and heard a voice saying to me, ‘Saul, Saul, why are you persecuting me?’ I answered, ‘Who are you, Lord:’ He said to me, ‘I am Yeshua of Nazareth, whom you persecute.’

“Those who were with me indeed saw the light and were afraid, but they didn’t understand the voice of him who spoke to me. I said, ‘What shall I do, Lord?’ The Lord said to me, ‘Arise, and go into Damascus. There you will be told about all things which are appointed for you to do.’ When I couldn’t see for the glory of that light, being led by the hand of those who were with me, I came into Damascus. One Hananiah (Ananias), a devout man according to the Torah, well reported of by all the Jews who lived in Damascus, came to me, and standing by me said to me, ‘Brother Saul, receive your sight!’ In that very hour I looked up at him. He said, ‘The God of our fathers has appointed you to know his will, and to see the Righteous One, and to hear a voice from his mouth. For you will be a witness for him to all men of what you have seen and heard. Now why do you wait? Arise, be immersed, and wash away your sins, calling on the name of the Lord.’

The third account is in Acts 26:12-18 as Paul testified before King Agrippa after he described that he punished and persecuted the Christians.

“Whereupon as I traveled to Damascus with the authority and commission from the chief priests, at noon, O king, I saw on the way a light from the sky, brighter than the sun, shining around me and those who traveled with me. When we had all fallen to the earth, I heard a voice saying to me in the Hebrew language, ‘Saul, Saul, why are you persecuting me? It is hard for you to kick against the goads.’

“He said, ‘I am Yeshua, whom you are persecuting. But arise, and stand on your feet, for I have appeared to you for this purpose: to appoint you a servant and a witness both of the things which you have seen, and of the things which I will reveal to you; delivering you from the people, and from the Gentiles, to whom I send you, to open their eyes, that they may turn from darkness to light and from the power of Satan to God, that they may receive remission of sins and an inheritance among those who are sanctified by faith in me.’
Having the three accounts in Scripture of the Apostle Paul’s conversion, his own account in his letter to the Galatians (1:17) is where he mentions “Arabia” and has been surmised that he went to Mount Sinai.

“But I make known to you, brothers, concerning the Good News which was preached by me, that it is not according to man. For I didn’t receive it from man, nor was I taught it, but it came to me through revelation of Yeshua the Messiah. For you have heard of my way of living in time past in Judaism, how that beyond measure I persecuted the assembly of God and ravaged it. I advanced in Judaism beyond many of my own age among my countrymen, being more exceedingly zealous for the traditions of my fathers. But when it was the good pleasure of God, who separated me from my mother’s womb and called me through his grace to reveal his Son in me, that I might proclaim him among the Gentiles, I didn’t immediately confer with flesh and blood, nor did I go up to Jerusalem to those who were emissaries before me, but I went away into Arabia. Then I returned to Damascus. (Galatians 1:11-17)

So is there information from the Apostle Paul’s Midrash of the Hexateuch to shed any light on his journey to “Arabia”?

Exodus with its theme “freedom from slavery” is the Source Text for the Midrash Galatians with its theme “freedom from slavery of sin” with words taken from the Greek translation (the Septuagint) of the Hebrew Scripture to form the framework of the Midrash. Specifically, Galatians 1:15-20 is the Midrash of Exodus 3:4-4:26 where eleven Greek words are common to both the section from the Septuagint of the translated Hebrew Scripture and the section in Galatians.

Perhaps the most important question is “Why didn’t the Apostle Paul just mention Mount Sinai specifically?”

This is the manner of Midrash.

In the Galatians passage Paul was stressing that none of the Apostles were in communication with him in order to impart the Gospel to him either before, during or immediately after his conversion on the Damascus Road in a way that is very similar to the way that Moses was not in touch with anyone before returning to Egypt to meet Aaron.

He prefaces this portion of the Midrash with that encounter:

But I make known to you, brothers, concerning the Good News which was preached by me, that it is not according to man. For I didn’t receive it from man, nor was I taught it, but it came to me through revelation of Yeshua the Messiah. For you have heard of my way of living in time past in Judaism, how that beyond measure I persecuted the assembly of God and ravaged it. I advanced in Judaism beyond many of my own age among my countrymen, being more exceedingly zealous for the traditions of my fathers. (Galatians 1:11-14)

Both Moses and Paul had extreme contrasts in their lives. Just like Moses (Exodus 2:12) Paul killed a man (Acts 7:58-8:1). Just like Moses Paul encountered the Messiah and was sent out: Moses to bring freedom from slavery; Paul to preach freedom from the slavery of sin. Both received revelation on Mount Sinai.

Paul identifies himself (much like God identifies Jeremiah in Jeremiah 1:5) in Isaiah 49:1 (Galatians 1:15 is a quote of that verse from the Septuagint) as a son of Israel, specifically by using “separated”, “from my mother’s womb” and “called”, all of which are in Jeremiah’s prophecy. From Isaiah 49:1 Paul uses “called” and “from the womb”. Note that in Isaiah 49:5-6 the prophet using the same words then identifies the Messiah “to bring Jacob back to Him” and “so that Israel is gathered to Him.” By placing himself in the prophet’s prophecy, Paul is identifying the Messiah as the Servant spoken of by Isaiah:

Now the Lord says, he who formed me from the womb to be his servant, to bring Jacob again to him, and to gather Israel to him, for I am honorable in the Lord’s eyes, and my God has become my strength. Indeed, he says, “It is too light a thing that you should be my servant to raise up the tribes of Jacob, and to restore the preserved of Israel. I will also give you as a light to the nations, that you may be my salvation to the end of the earth.” (Isaiah 49:5-6)

Late in the Nineteenth Century Lightfoot (1) opined that Paul traveled to Mount Sinai, much like Elijah (1 Kings 19:8-18) where Damascus is also mentioned. The Midrash in Galatians 1:15-20 of the Source Text Exodus 3:4-4:26 gives the most weight to that postulation in the past two millennia. It appears that Luke placed this visit to Mount Sinai by Paul between verses 22 and 23 of Acts 9.

Have you had a supernatural life-changing encounter with the Messiah? Let this be the day! With your heart you can believe resulting in righteousness; and with your mouth you can confess your belief in him resulting in salvation. (Romans 10:10)

Immediately after this section of the Midrash Paul identifies Isaiah’s location of that Sacrifice for that supernatural life-changing encounter with Messiah and you may recall that article. (3)