“All Scripture is Inspired by God,” The Oldest Midrash, By Dr. John David Pitcher Jr 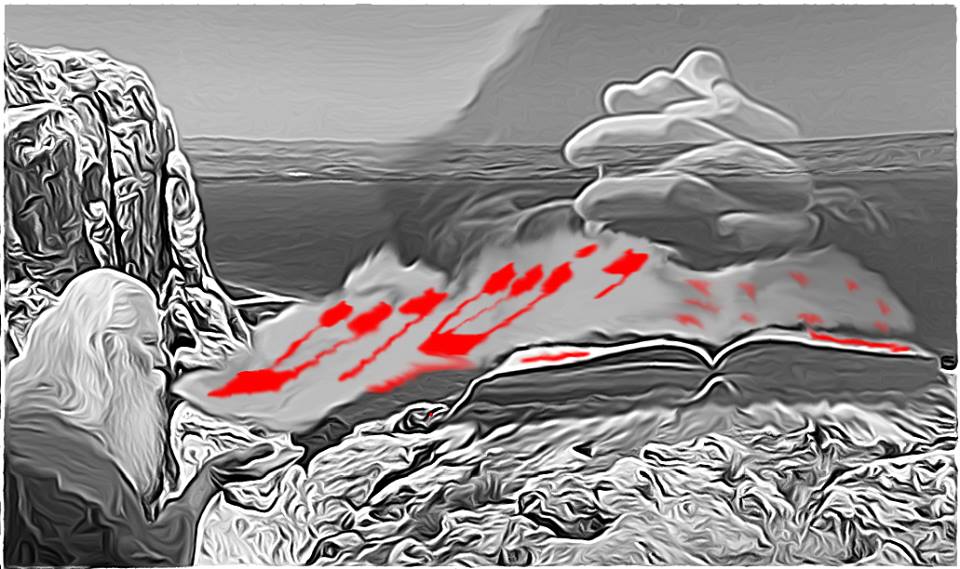 n June of 2017 my wife and I attended a cross-cultural training course for four weeks in a small town in North Carolina. The training was logically well thought out in a linear fashion, teaching us how to build cross-cultural bridges so that we could build relationships with those of another culture so that we could share the Good News of the Messiah with them. But it stopped short of what seemed to be the next viewpoint for the logical progression of cross-cultural training and that viewpoint turns out to be in the middle of controversy…

For the past thirteen years my wife and I have lived around the Jewish people and we had crossed a cultural divide celebrating Purim, Hanukkah and Passover with their fulfillments in the Messiah and many other events and functions with them and have been on a cross-cultural bridge to God’s Chosen People though the course really enlightened us as to what we had been going through.

The first time that a cross-cultural bridge was built to share that Good News you may be surprised to find out was 250 years before the Incarnation of the Messiah in Bethlehem as foretold by Micah (Micah 5:2; cf. Matthew 2:1-6; Luke 2:4-5, 7, 15; John 7:42). The Hebrew Scriptures, the Tenakh was translated by 70 Rabbis into Greek into what we call the Septuagint (LXX). Why this is so important is that a large portion of the known world spoke Greek at the time and this allowed the Tenakh’s truths to be shared with those that did not speak Hebrew.

First Century Christians, after the death and Resurrection of the Messiah relied on the LXX to quote the Hebrew Scripture in the New Testament written in Greek. There are over 250 quotations from the LXX used by New Testament writers. Additionally, the meaning of the New Testament words, when they are also present in the LXX get their contextual meaning from those 70 Rabbis’ translation of the Hebrew Tenakh into the Greek LXX. (This outrageously goes against the grain of current thinking in hermeneutics that relies on New Testament usages to find meaning and is already controversial before the words escape from between the confines of these parentheses.) And recently discovered is the Apostle Paul’s use of over 1300 words in order from the LXX placed in order into six (out of his fourteen) of his letters in the New Testament making them the framework of a Midrash, a commentary, of the first six books of the Tenakh, the Hexateuch.

One of those letters in Paul’s Midrash contains the verse (2 Timothy 3:16) that includes the phrase “All Scripture is Inspired by God”. You may also be surprised that this verse is in the middle of a controversy!

So where did Paul get that phrase in the Tenakh? And what was he commenting on? And does his commentary, now that it is seen shed any light on the controversy of “All Scripture is inspired by God”?

First the controversy must be explained.

Many sources can be found that describe the controversy of “Inspiration” versus “Preservation”. Those sources can be summed up as 1) Inspiration starts with God, a person and a blank piece of paper and include the Hebrew Scripture and the Greek New Testament and 2) Preservation is when God uses men and women to translate those words into other languages.

A problem arises however when a culture receives their newly translated Word of God into their own language and they get to 2 Timothy 3:16. Is their translation “Inspired” or “Preserved”? Are we to modify 2 Timothy 3:16 to say “Your Scripture is preserved by God”?

Since 2 Timothy 3:16 is within Paul’s Midrash of Numbers, there is a lot of new evidence to help answer these questions.

First, let’s look at the entire verse and the subsequent verse since they are both part of a complete sentence.

“Every Scripture is God-breathed and profitable for teaching, for reproof, for correction, and for instruction in righteousness, that each person who belongs to God may be complete, thoroughly equipped for every good work.” (2 Timothy 3:16-17, Messianic World Bible)

Our Jewish brothers and sisters agree that the LXX is “inspired by God” and attribute a great miracle with the translation. (1) I’ve included the sketch “All Scripture is Inspired by God” with the red Hebrew letters of Yeshua’s name signifying that the prophecies and foreshadowing of the salvation brought by his death and Resurrection are throughout the Hebrew Scripture and Greek LXX. I’ve partly taken the description of the Ancient of Days in Daniel 7:9 for the sketch:

“I watched until thrones were placed, and one who was Ancient of Days sat. His clothing was white as snow, and the hair of his head like pure wool. His throne was fiery flames, and it’s wheels burning fire.”

One may argue that only the over 250 verses that are quoted by New Testament writers are “inspired”. But what about the hundreds of words that gain their contextual meaning from their first use in the LXX? [(2), to give but just one example] And remember, when Paul wrote the words “All Scripture is inspired by God” he had only the Hebrew Scripture and the Greek LXX. And it was exclusively the Greek LXX from which he and other New Testament writers quoted.

And then there’s the issue of his Midrash.

He took over 1300 Greek words from the Greek LXX and placed them in order in six of his letters totaling over 18,000 Greek words for a 7% usage from the LXX as a framework of his Midrash. My Jewish friends often exclaim “Paul was a plagiarist!” Just taking words from the LXX wouldn’t make the six letters a Midrash. Paul took the ideas around the words, even often a little different than the Hebrew Scripture and commented on them, not ignoring the Hebrew but using the Greek and gave us those six letters.

2 Timothy is a Midrash of Numbers. Specifically, 2 Timothy 3:15-17 is a Midrash of Numbers 24:2-9. The word “inspired by God” (Theopneustos) and used by Paul in 2 Timothy 3:16 is derived from the verse (Numbers 24:2) where Moses recorded that the Spirit of God (Pneuma Theou) came upon Balaam, the false prophet when Balak desired that he bring a curse upon Israel. Note how the Greek word “inspired by God” is turned around in two words “Spirit of God” not to get too much into the specifics of the rest of this section of the Midrash. (3)

Balaam words as a false prophet are recorded as inspired by God. (His donkey’s words are even inspired by God in Numbers 22:28, but that’s another section of the Midrash that is quite informative!) And those words help weigh in on the controversy. (There are other quotations from outside Scripture that have found a place in Scripture, including from Yeshua and Paul but that is outside the scope of this article.)

What are we to conclude? What are we to say to the people of that culture that have just received their own Word of God into their own language? Do we water down our answer with “Your Word of God is preserved”? What kind of cultural bridge is that? When the Jewish people read their New Testament in Hebrew translated from the original Greek are they going to accept their translation is preserved rather than inspired when the words in the New Testament gain their contextual meaning through the Greek in the LXX from the Hebrew in the Tenakh in the first place? I think not! And when the Jewish people accept Messiah it will be with a double portion of the spirit of Elijah! (4)

The Greek LXX was translated from the original Hebrew. The New Testament is largely derived from verses and words from the Greek LXX.

So the contextual meaning of 2 Timothy 3:16 is that if Scripture is authentically translated from the original Hebrew Scripture or the original Greek New Testament as much as possible (note that many places in the LXX are different from the Hebrew Scripture when both are individually translated into English) then it must be “inspired by God”. God has not taken his hand off of his Word through all the centuries. In the context of 2 Timothy 3:16, the Greek LXX is “inspired by God” just as our Jewish brothers and sisters insist.

That being said, if the translation is derived from anything other than the Hebrew Scripture or the Greek New Testament, it cannot be “inspired by God”. This is happening in many “modern” translations taking into account what is “politically correct.” These are not “inspired by God” because they don’t accurately reflect the original language of the Hebrew Scripture and the Greek of the New Testament and should be avoided.

If your translation is derived from a third language, say for instance a new language from the English, then this possibly could be called “preserved”. The most well known Bible translators do use the original Hebrew and Greek. (5) (On a side note, the “parchments” mentioned by Paul in 2 Timothy 4:13 and long debated as to their identity represent the Greek translation of the Hebrew Scripture, the LXX although again, that is in another section of the Midrash and must wait for another day.)

How can you tell if your Bible is “inspired by God” or not? Usually in the front of the Bible under “Introduction” there will be a textual basis for that translation in Hebrew (for the Hebrew Scripture) and in Greek (for the Greek New Testament). There are some differences among the Hebrew and Greek manuscripts and different translators follow what they are led to believe what is the correct Source Text and when there is a difference then notations are made.

Have you been “inspired by God” to read his Word? Have you seen Yeshua the Messiah consistently concealed through Hebrew Scripture and revealed in the Greek New Testament together written by 40 different people? This could have only been accomplished through the Spirit of God. This same Holy Spirit can dwell within you if you confess with your mouth Yeshua the Messiah and believe in your heart that God has raised him from the dead. You will be saved. (Romans 10:9)

(1) https://simple.wikipedia.org/wiki/Septuagint
(2) http://jerusalemchannel.tv/identity-messiah-oldest-midrash/
(3) There are three Greek words (four counting both parts of ‘God-inspired’ common to both the Source Text in Numbers and the Midrash in 2 Timothy. Note Yeshua the Messiah is described specifically in the Source Text:
He is the King higher than Agag and his kingdom shall be exalted.
God brought him out of Egypt.
He has strength like a wild ox.
He shall consume the nations, his enemies.
He shall break their bones and pierce them with arrows.
He bows down, he lies down as a lion; and as a lion, who shall rouse him. (Cf. the description of Israel in Numbers 23:24.)
(The next section of the Source Text/Midrash is Numbers 24:10-25/2 Timothy 4:1-2 and includes another description of Yeshua the Messiah and events associated with “His Appearing” for further study.)
(4) https://http://jerusalemchannel.tv/prophetic-transference-elijahs-…/
(5) www.wycliffe.org/…/wycliffe-101-the-how-and-why-of-bible-tr…