The Feast of Trumpets is a Rehearsal to Hear Messiah’s Voice? 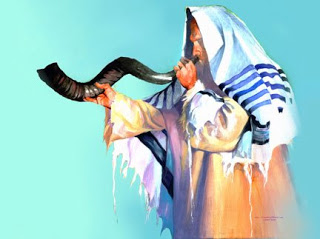 Is it possible that the God’s command to blow the Trumpet (shofar) on the Feast of Trumpets (The Jewish New Year), is actually not just about blowing Trumpets? What if it is a rehearsal that is supposed to prepare us to hear Messiah’s voice?

A voice like a trumpet
In Revelation 4:1, the apostle John writes, “After this I looked, and there in heaven was an open door. The first voice that I had heard speaking to me like a trumpet said, ‘Come up here, and I will show you what must take place after this.’”

John hears this voice and recognizes it instantly. It is “[t]he first voice that I had heard speaking to me like a trumpet” (v. 1). This is, of course, the voice of Jesus, who spoke to John many times during His earthly ministry. But now, with the sonic fullness of heaven’s atmosphere, John hears the Messiah’s magnified tones and remembers the sound from Rev. 1:10 as Jesus instructs him to write what he sees to the seven churches in Asia Minor. Some time later the Savior tells John, “Come up here, and I will show you what must take place after this” (v. 1).

There is some connection between the shouts of Jesus and the opening of the graves;

In John 11, Jesus stands outside the tomb of Lazarus and shouts loudly, “Lazarus, come out!” His friend soon emerges from the grave after being dead nearly four days.

In Matt. 27:50, just before dying, Jesus shouts with a loud voice and then gives up His spirit. The very next verses record, “Suddenly, the curtain of the sanctuary was split in two from top to bottom; the earth quaked and the rocks were split. The tombs also were opened and many bodies of the saints who had gone to their rest were raised. And they came out of the tombs after His resurrection, entered the holy city, and appeared to many” (vv. 51-53).

And, of course, Paul’s teaching about the future resurrection of the saints in 1 Thess. 4:13-18 features Jesus descending from heaven with a shout, resulting in the resurrection of believers whose bodies rest in the graves.

Maybe it was the first thing a man named, Adam, ever heard?
Genesis 3:8
Verse Concepts
They heard the Voice of the LORD God walking in the garden in the cool of the day, and the man and his wife hid themselves from the presence of the LORD God among the trees of the garden.

The sound of the trumpet also is significant. Not only are trumpets used to herald kings, alert armies to prepare for battle, and forewarn God’s people of judgment, but Paul tells us a trumpet will sound when it’s time for the church to be called into heaven: “For the trumpet will sound, and the dead will be raised incorruptible, and we will be changed” (1 Cor. 15:52b).

Rosh Hashanah, the feast of the Jewish New Year is a feast in which shofars, or rams’ horns, play a prominent role, and what do you think?

Is it preparation for us to hear the Voice of Yeshua (Jesus), as the Great Shofar, calling his Body home?