“Faith comes by hearing, and hearing…” But, Hearing What? 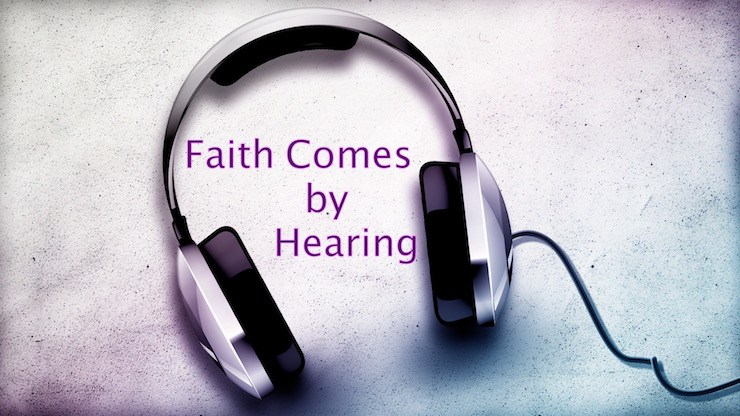 “Faith comes by hearing, and hearing…” But, Hearing What?

How often have you heard this popular Scripture verse, Roman’s 10:17 taught in such a way that you come away with an understanding of it that goes something like this?

“Faith comes by hearing and hearing…so read your Bibles silently in your prayer room, over coffee and before bed silently while your spouse is sleeping next to you. Or, do it silently in school and silently at work or in the government center–without disturbing anyone else (that is, SILENTLY?).”

I know, there are going to be lots of people sharing “exceptions” of persecuted Christian’s. YES, there is a place for wisdom and silence, but hear me out?

This “read silenlty” tradition is very new in the long history of Bible reading, as is praying silently. It really took hold in the USA after 1963.

Here is partially what happened to cause a chilling effect of reading the Bible and praying outloud in schools, which then melted into the social fabric of society, even our own homes:

The U.S. Supreme Court agreed, ruling 8-1 (Engel v. Vitale, 1962) that school-sponsored prayer violated the First Amendment to the U.S.Constitution. Subsequent courts have ruled that student prayer must be done silently, so as not to marginalize religious minorities.

The 1963 case that dealt with Bible reading in school is called Abington School District vs. Schempp. The Abington School District is north of Philadelphia in Pennsylvania. At the time, Pennsylvania had a law requiring Bible reading at the beginning of each day. A man named Edward Schempp challenged the law and the Court agreed that the state cannot require somebody to read the Bible even if they are Christians – the state should not be in the business of requiring students to be devoted to a particular religious faith.

To clarify that it wasn’t ruling out all Bible reading, the Court went on to write:

“…the State may not establish a ‘religion of secularism’ in the sense of affirmatively opposing or showing hostility to religion, thus ‘preferring those who believe in no religion over those who do believe.”

Fast forward to today, all these years later, and many teachers and administrators are acting exactly as the court warned against. They are, in a sense, establishing a religion of secularism where they say there can be no Bible reading out loud or silently, and only silent prayer. This, despite subsequent rulings allowing student led prayer and Bible reading.

In other words, they have been essentially silencing the power of the spoken Word of God and spoken Prayer, while at the same time, pastors and Sunday school teachers have stopped teaching these once common “out loud” practices.

The result has seen silent Christian’s afraid to speak up, and a significant drop Bible literacy among believers and in society in general.

The Johnson Amendment is a 1954 law that bars tax-exempt organizations, churches and charities from engaging in political activity. So, stiffled churches, and by extension, stiffled Christians, were gradually told they are not allowed to “bring their religious convictions” to public discussions, schools and into workplaces.

With each assault on Christian Religious speech, prayer and Bible reading, fewer and fewer believers pushed back until today’s situation in public and at home.

The natural result of being silenced in public, at least in the USA and many other Western Countries, has been less effective (and less offensive, as in offending non-christians AND not being on the offence stratigically in society amd our personal lives)–silent prayers and silent Bible reading even in many now silent Chistian homes.

As we are partners with God and His representatives to our society, Isaiah 55 should hold some guidance for us on this “speaking out loud” subject:

For as the rain and the snow come down from heaven
and do not return there but water the earth,
making it bring forth and sprout,
giving seed to the sower and bread to the eater,
11so shall my word be that goes out from my mouth;
it shall not return to me empty,
but it shall accomplish that which I purpose,
and shall succeed in the thing for which I sent it.
12“For you shall go out in joy
and be led forth in peace;
the mountains and the hills before you
shall break forth into singing,
and all the trees of the field shall clap their hands.
13Instead of the thorn shall come up the cypress;
instead of the brier shall come up the myrtle;
and it shall make a name for the LORD,
an everlasting sign that shall not be cut off.”
ISAIAH 55 10-13

As the Spirit of God is within each believer, each spoken prayer is then spoken in concert with His Spirit, making our words declarations for God to move in response to our prayers to which He LISTENS. Your words, spoken out loud in Agreement with God, and in Declaration of God’s promises, also results in good fruit we will see.

There is much more to say on this subject and many more verses to quote, but–LET’S MOVE TO THE SUBJECT OF FAITH:

“Consequently, faith results from listening, and listening results through the word of the Messiah.” ROMANS 10:17 ISV

Listening! It means you actually have to hear with your ears. You don’t hear or listen with your eyes! Only one set of organs allows you to hear.

MESSIAH is the literal Word of God, both spoken and written.

Believers are not at all called to be silent, we are to be vocal ambassadors of the kingdom of God, imitating our Messiah, Yeshua/Jesus, who was a very vocal promoter of his Father’s Kingdom.

Remember this, the God did not begin creating the world by silently reading his scrolls to himself while dining in heaven during a banquet, while having a mouthful of food or shame.

He boldly spoke, “Let there be light,” and there was light.”

Have you never read the repetition in Genesis 1? “God said…and it was…GOD saw…and it was good.

Here is a simple pattern found in both Genesis 1 and our own lives:

1) GOD saw nothing in front of his eyes except potential
2) God spoke the Word
3) God saw the results of His spoken Word.

Jesus did the same with nearly every miracle.

Jesus’s followers are promised we will do greater thing than he did (John 14:12-14).

Let me leave you with this:
“Let this mind be in you, which was also in Christ Jesus: 6 Who, being in the form of God, thought it not robbery to be equal with God:
7 But made himself of no reputation, and took upon him the form of a servant, and was made in the likeness of men:
8 And being found in fashion as a man, he humbled himself, and became obedient unto death, even the death of the cross.
9 Wherefore God also hath highly exalted him, and given him a name which is above every name:
10 That at the name of Jesus every knee should bow, of things in heaven, and things in earth, and things under the earth;
11 And that every tongue should confess [out loud] that Jesus Christ is Lord, to the glory of God the Father.”
Philipians 2: 5-11