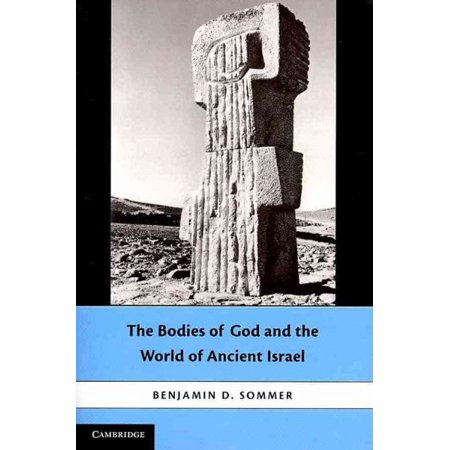 “One of the conclusions that I came to, to my shock, when I finished this book [The Bodies of God and The World of Ancient Israel], is that we Jews have no theological objection to the Trinity.

We Jews for centuries have objected to
the Trinity, have labeled it pagan, have said: ‘Well, that’s clear. There you can see that the core of Christianity doesn’t come out of the Hebrew Bible, the Tanakh, what they call the Old Testament. Really, they are being disloyal to the monotheism of the Old Testament.’

Theologically, I think that the model of the Trinity is an old ancient near eastern idea that shows up in the Tanakh and in a different way shows up in Jewish mysticism as well.”

From his Lecture on his book: The Bodies of God and the World of Ancient Israel: Part I, from The Open University for Jewish Learning

Sommer’s thesis is, as the title of the book implies, not that the God of Israel has a body—this Sommer assumes—but that he has several bodies which have various locations. Hence, the two tasks he sets for himself are, first, demonstrating God’s multi-corporeality and, second, exploring its implications for religion associated with the Hebrew Bible (which is not to say only ancient Israelite, but modern religion as well). By way of introduction he lays out simply and effectively that the Hebrew Bible’s depiction of God is as a bodily being; the number of texts that casually make this point are too numerous to allow the reader any other conclusion. Additionally, he demonstrates that these depictions are likely more than mere metaphors for the authors: they really believed that YHWH was a physical being.

Some thoughts to consider–

Plural Verbs:
Normally the plural name “Elohim” is followed by a singular verb. But there are several fascinating instances when “Elohim” is accompanied by a plural verb. Genesis 20:13 literally says in Hebrew that Elohim (God) they caused me to wander from my father’s house… And in Genesis 35:7 Elohim (God) they appeared to him. 2 Samuel 7:23 says: What nation on the Earth is like Your people Israel, whom Elohim they went to redeem for Himself. Psalm 58:11 declares that surely there is a God they judge the Earth.

Plural Pronouns:
There are times when plural pronouns are used to describe the One God. The Lord God, speaking in Genesis 1:26 says: Let Us make man in Our image according to Our likeness. (See also Genesis 3:22, 11:7 and Isaiah 6:8 for other instances of plural pronouns that refer to God).

Rabbinic Considerations
GOD shares the same Name as Messiah?Jehovah, the YHVH, Yehovah, or Yahweh, as expressed in this passage from the Midrash nestled in the commentary on the Book of Lamentations:

‘What is the name of the Messiah? Rav Ava
ben Kahanna said ‘Jehovah is his name and this is proved by, ‘this is his name…”

Rabbi Ava ben Kahanna then goes on to quote Jeremiah 23:5-6 in support of his argument.

The Jewish author in the New Testament wrote John 17:11, which most people
probably don’t even realize is in their New Testament, which is written entirely by Jewish men”

“I am no longer in the world, but they are in the world, and I am coming to you. Holy Father, protect them by your Name, the Name that you gave me, so that they may be one, as we are one.”

“Said Rabbi Yohanan: ‘Three will be named with the name of the Holy One, blessed be he, and they are: The Upright, the Messiah, and Jerusalem… Messiah, as it is written (Jer. 23)
‘And this is His name whereby He shell be called: YHWH, Our Righteousness” (Babylonian Talmud Baba Bathra 7572).

Minor Tractate, Sofrim 13, Rule 12: “Gladden us, O Lord ourGod, with Elijah the prophet, thy servant, and with the kingdom of the house of David, thine anointed. Soon may he
come and rejoice our hearts. Suffer not a stranger to sit upon his throne, nor let others any longer inherit his glory; for by thy holy name thou didst swear unto him, that his light should not be quenched for ever. “In His days Judah will be saved and Israel will live in safety. This is the name by whichHe will be called; The Lord, Our Righteousness. Blessed art thou, O Lord, who sprouts a horn of salvation for His people,
srael.”

Here, Messiah Son of David is identified with the figure mentioned in Jeremiah 23, ‘YHWH, Our Righteousness’.

“As they both confessed to the wrong they had done, Judah juxtaposed Reuben… Oh, I will show him the salvation of God! Since he admitted, he received the kingship and from
him came a Messiah who will save Israel, as it is written: ‘In His days, Judah will be saved.’” (“Tzror Hamor” Genesis,
Parashat Vayechi”) Here the commentator explains Judah’s privilege – that the Messiah would come from him, and is basing his words on Jeremiah 23:6, meaning that he also saw
this verse as a Messianic prophecy which claims that the Messiah will be God.

In Midrash Eichah 1 it says about this verse: “What is the name of the Messiah King?” Rabbi Abba Bar-Kahana said:

‘The Lord’ is his name, and that is the name by which He will be called, The LORD, Our Righteousness”.

In Midrash Tehilim (Psalms) it is written that God calls the Messiah by His name, and what is His name? The answer given is: “YHWH, Man of War” (Exodus 15:3)

And about the Messiah we read: “And that is His name by which He will be called: YHWH, Our Righteousness”

Did you get it? The Sages attributed “YHWH, Our Righteousness” in Jeremiah 23:6 to be speaking about the Messiah.

And this is only the tip of the iceberg!