How King David Killed The Flame of God in Israel 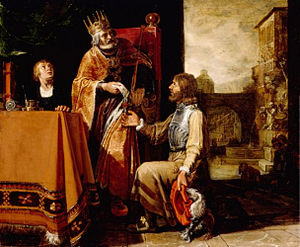 Tov Rose    david, king david, messiah, uriah   2    1898 Views
There are so many lessons the Bible teaches us that can only be understood by actually translating the names of people, when you study. I was inspired to add these translations when I put together the New Messianic Version Bible.
Lots of Reviewers on Amazon say they hate these, but they are badly needed.
Here is an example of why.
David’s sin of killing Uriah the Hittite (who left terrorism to follow the God of Israel), becomes so much more clear when his name is translated! The result of David’s killing him was the “Flame of God” departing from the Throne of David, until Messiah redeemed it. David killed “The Flame of God”! David killed a righteous gentile.
Uriah represents the Flame of God among the gentiles, joining Israel through marriage. He represents Jesus, The Word, in the gentile members of the Bride.
David’s heinous crime is equivalent to killing the “Fire” of Israel’s true King: The Word of GOD.
This is why The Word of GOD seems so upset with David.
From this point on, every king that comes from David has less of a “Flame of God” than what came before, with an occasional increase in brightness, until it is all but snuffed out.
Until the Light of the World comes…
Here is the passage:
2Sa 12:7 And Natan [giver] said to David [beloved], youi [are] the man.
Thus says the LORD-Yehōvah (Messiah Pre-Incarnate) God-Elōhīm [The Word – The Many Powered One] of Yisra’el [He holds onto the Heel of The Word], I anointed youi king over Yisra’el [He Holds Onto The Heel Of God], and I delivered youi out of the hand of Sha’ul [desired];
2Sa 12:8 And I gave youi youri master’s house, and youri master’s wives into youri bosom, and gave youi the house of Yisra’el [He Holds Onto The Heel Of God] and of Y’hudah [Let Him (God) Be Praised]; and if [that had been] too little, I would moreover have given to youi such and such things.
2Sa 12:9 For what reason have youi despised the commandment of the LORD-Yehōvah (Messiah Pre-Incarnate), to do evil in his sight? youi have killed Uriyah [My Flame/Light is Yehōvah] the Hitti [Terrorists] with the sword, and have taken his wife [to be] youri wife, and have slain him with the sword of the children of ‘Amon [Inbred].
2Sa 12:10 Now therefore the sword shall never depart from youri house; because youi have despised me, and have taken the wife of Uriyah [My Flame/Light is Yehōvah] the Hitti [Terrorists] to be youri wife.
2Sa 12:11 Thus says the LORD-Yehōvah (Messiah Pre-Incarnate), Behold, I will raise up evil against youi out of youri own house, and I will take youri wives before youi eyes, and give [them] to youri neighbor, and he shall lie with youri wives in the sight of this sun.
2Sa 12:12 For youi did [it] secretly: but I will do this thing before all Yisra’el [He Holds Onto The Heel Of God], and before the sun.
2Sa 12:13 And David [beloved] said to Natan [giver], I have sinned against the LORD-Yehōvah (Messiah Pre-Incarnate). And Natan [giver] said to David [beloved], The LORD-Yehōvah (Messiah Pre-Incarnate) also has put away youri sin; youi shall not die.
2Sa 12:14 However, because by this deed youi have given great occasion to the enemies of the LORD-Yehōvah (Messiah Pre-Incarnate) to blaspheme, the child also [that is] born to youi shall surely die.
2Sa 12:15 And Natan [giver] departed to his house. And the LORD-Yehōvah (Messiah Pre-Incarnate) struck the child that Uriyah’s [My Flame/Light is Yehōvah’s] wife bore to David [beloved], and it was very sick.