Jesus in the Targums

Jesus in the Targums

is book explores the theological and social context of the 1st Century Jewish mind that first encountered the Apostle John’s words in the New Testament: John 1:1, “In the beginning was the Word, and the Word was with God, and the Word was God.” 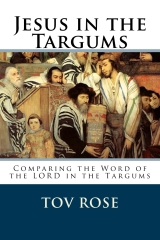 This book explores the theological and social context of the 1st Century Jewish mind that first encountered the Apostle John’s words in the New Testament: John 1:1, “In the beginning was the Word, and the Word was with God, and the Word was God.”

All of the first followers of Jesus were JEWISH and they were a product of an authentic 1st Century Judaism. If you’ve never read the “New Testament,” then you’re missing out on an incredibly important piece of thoroughly Jewish history and culture.
Take for example, the New Testament passage of John 1:1, “In the beginning was the Word, and the Word was with God, and the Word was God.”

Most people do not realize that the Jewish man, known to Christians as the Apostle John, was actually using terminology familiar to 1st Century Jewish people. It was familiar, because it was language read in the Targums in the Synagogue every week. What John was doing by stating his first sentence in the manner was very similar to the technique used at the time (and today in some Orthodox Jewish sects), whereby one person would recite the first verse of a Psalm, and the students (or members of the Synagogue), would begin to recite the rest of the Psalm.

Jesus (who by the way was NOT the first “Christian”), was a Jewish rabbi and he did this as is recorded in the New Testament at one point. His audience should have understood to recite the entirety of Psalm 22 in response, “And about the ninth hour Jesus cried out with a loud voice, saying, ‘Eli, Eli, lema sabachthani?” that is, “My God, my God, why have you forsaken me?'” Matthew 27:46

Using this technique, John the Apostle, was calling on Jewish familiarity with the Aramaic Targums and calling them to apply what they learned from the Targums about The Word of the Lord, to Yeshua/Jesus himself.

This study is simply highlighting all of those passages that would have been read from Targums in the Synagogue throughout the course of a year in 1st Century Judaism, calling attention to the passages mentioning The Word of the Lord. Jewish theology of the period understood that The Word of the Lord was a “lesser Yahweh”. In other words, he was the God who interacted with humanity and creation directly, performing miracles, signs and wonders and simply speaking to humans. The “Greater Yahweh” was understood to exist in the Heaven. The “lesser Yahweh” did the will of and spoke the words of the “Greater Yahweh.”

Why is it important for Jewish people to use this book? Because it gives us an insider’s view of how Christians read the Hebrew Bible, which they call, “The Old Testament.”
This work is a side-by-side comparison of passages in the various Targums showing that “The Word of the Lord” was considered an important person of a multi-personality Godhead in the understanding of Judaism predating 3 AD/CE.

There are no reviews yet.

Be the first to review “Jesus in the Targums” Cancel reply