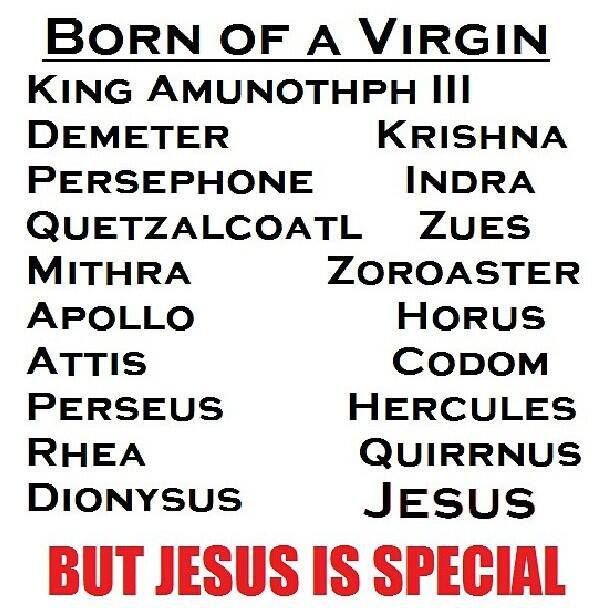 Someone posted the following in order to try and disprove belief in Jesus. What he said can trip up younger and less mature believers.

ORIGINAL POST
The Jesus virgin birth story is just one of several “virgin births” at the time – other examples include:
1. Horus

Horus, ancient Egypt’s falcon-headed patron god of kings, was conceived after the murder of his father Osiris. As the story goes, Seth killed his brother Osiris and scattered the dismembered pieces of his body. Osiris’ wife Isis picked up the pieces of her husband — all but his penis, which was thrown into the Nile and eaten by a fish, according to some accounts. After fashioning a golden phallus, Isis reassembled and resurrected Osiris to conceive her son Horus. [The Top 10 Most Controversial Miracles]

The earth mother of the Aztecs, Coatlicue, found a ball of feathers that fell from the sky and became pregnant when she placed it in her waistband. Outraged and suspicious of the origins of their mother’s pregnancy, Coatlicue’s 400 sons and her daughter, Coyolxauhqui, killed their mother. Her son Huitzilopochtli, the god of war and the sun god, sprang from Coatlicue’s womb, fully-grown and armored, when she was killed.

During a thwarted rape attempt, the crippled Greek god Hephaestus (whose Roman equivalent is Vulcan) spilled semen on the virginal goddess Athena’s thigh. According to myth, she wiped off his ejaculate with a piece of wool and flung it on to the earth, from which sprang Erechtheus, the mythological king of ancient Athens. Athena became the adoptive mother of Erechtheus and his origin story became a symbol of pride for real-life Athenians who saw themselves as autochthones, or “people sprung from the land itself.”

After Minerva sprang from the head of her father Jupiter, Juno (Jupiter’s wife) wanted to create a child on her own, too. In the Roman poet Ovid’s “Fasti,” Juno sought help from the goddess Flora to conceive without her husband. With the touch of a magic flower, Juno was impregnated with Mars. According to some accounts, she also sidestepped Jupiter in conceiving Vulcan, enlisting instead the help of the wind.

Like the birth of Jesus, the birth of Qi bypassed a father in Chinese myth. Qi was miraculously conceived when his mother Jiang Yuan stepped in a giant footprint left by the supreme deity Shangdi. Without an earthly father of her baby, Jiang Yuan tried to abandon him after he was born. But Qi, whose name means “the abandoned one,” survived each time his mother tried to get rid of him. Jiang Yuan eventually took back her son, after recognizing his supernatural resilience. Qi proved to be a precious farmer and later became known as Houji, a god of agriculture and the mythical ancestor of China’s Zhou dynasty.

Stories about miracle births have also entered the less hallowed realm of urban legend. One rumor out of the Civil War holds that a stray bullet from the battlefield impregnated a young Virginia woman as she stood on her porch. On it’s way to the woman’s uterus, the bullet allegedly passed through the scrotum of a soldier, picking up the semen needed to make a baby boy. The debunking website Snopes.com attributes the source of this story to a hoax article written by an “L.G. Capers” in The American Medical Weekly. The story, however, persists and has inspired a “Dear Abby” advice column and an episode on the TV show “House.”

TOV’S RESPONSE
There is another explanation and it is referred to in Jewish histories. Here it is: Adam and his family line shared the story of a redeemer coming to save mankind from the evil he caused us. There are a number of historians/scholars who believe that the ancient Hebrew Zodiac was passed down at least from Enoch, if not from prior to him. This version of the Zodiac was used Universally in every major culture in the world until a Chinese emperor changed theirs, and some others followed his lead. The Hebrew Zodiac has been called by Christian scholars, “The Gospel in the Stars”, because it tells the story of Messiah coming, born of a virgin. It speaks of a dragon who would bruise Messiah’s heel (an obvious reference to Genesis 3).
And before you or anyone else goes off again about the “virgin” birth stuff, can we just…not?

Now, if any of this sounds far-fetched, look at Genesis 4:1 in Hebrew. The Sages have literally jumped through major hoops to try and get that passage to say something other than what it actually says in it’s plain reading. Christians have done the same with this verse, by the way.

My point: 1) There is some evidence in the written Torah that even Moses, in writing Genesis, shared these words showing that EVE believed that she had given birth to Elohim! Obviously, her firstborn son was about as far from holy as one could possibly be. 2) IF the Hebrew Zodiac is as ancient as Judaism claims, AND taking into account the FACT that all ancient cultures used the SAME Zodiac for the first 2,000 after the flood of Noah’s day, THEN it makes sense that these other cultures would build upon the Zodiac’s story of a coming Virgin-born Redeemer and apply it in their own context and culture.

In other words, those cultures pulled from a common source material and Christianity is not a copy-cat religion, but tells the story of the True Redeemer hoped for by Adam and Eve and Enoch.

If you want to read more about his interesting subject: http://bit.ly/2zrgg4R

Share | Tweet | Share | Pin It | +1 | print | email
Categories: christianity, christians, church, classes
Disclosure of Material Connection: Some of the links in the post above are “affiliate links.” This means if you click on the link and purchase the item, I will receive an affiliate commission. Regardless, I only recommend products or services I use personally and believe will add value to my readers. I am disclosing this in accordance with the Federal Trade Commission’s 16 CFR, Part 255: “Guides Concerning the Use of Endorsements and Testimonials in Advertising.”