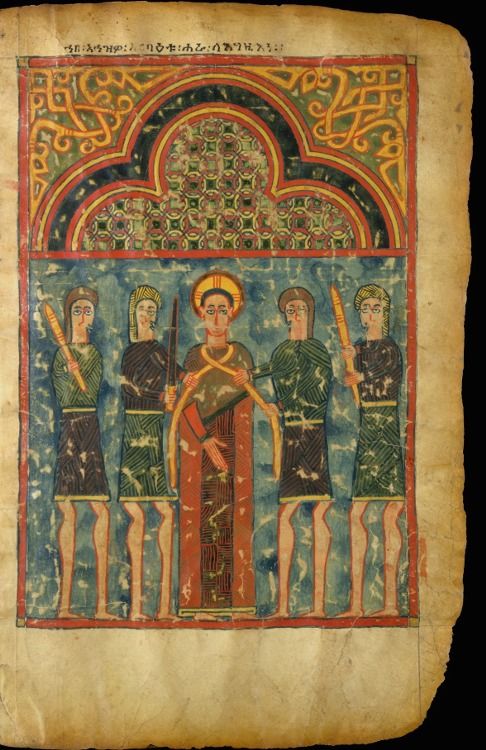 Thoughts on this?
The canon of the Ethiopic Bible differs both in the Old and New Testament from that of any other churches.
As a whole, books written in the Geez language and on parchment are numerous. The Ethiopian Orthodox Church has 46 books of the Old Testament and 35 books of the New Testament that will bring the total of canonized books of the Bible to 81. To the Ethiopic Church, the Word of God is both the written Bible and also Apostolic traditions that were written down. They have many hundreds of books in this Apostolic tradition.
These are the books in their Bible, which differs from most other Canonical Tradition: Old Testament divided into four sections. Those books include
A. The Holy Books of the Old Testament
Books of Law (the 5 Books of Moses):
1. Genesis
2. Exodus
3. Leviticus
4. Numbers
5. Deuteronomy
Books of History
6. Joshua
7. Judges
8. Ruth
9. 1st and 2nd Samuel
10. 1st and 2nd Kings
11. 1st and 2nd Chronicles (2nd Chronicles includes the Prayer of Manasseh)
12. Ezra and Nehemiah
13. Ezra Sutuel and 2nd Ezra
14. Tobit
15. Judith
16. Esther
17. 1st Meqabeyan
18. 2nd and 3rd Meqabeyan
19. Joseph Ben Guriyon
20. Jubilees
31. Enoch
Books of Psalms (Songs) and Wisdom
32. Job
33. Psalms
34. Proverbs
35. Reproof (“Tsegats” in Ge’ez)
36. Ecclesiastes
37. Song of Songs
38. Wisdom (of Solomon)
39. Sirach
Books of Prophecy
40. Isaiah
41. Jeremiah (including Lamentations, the Remainder of Jeremiah, and Baruch)
42. Ezekiel
43. Daniel (including Susannah, the Prayer of the Three Children, and Bel and the Dragon)
44. Hosea
45. Amos
46. Micah
47. Joel
48. Obadiah
49. Jonah
50. Nahum
51. Habakkuk
52. Zephaniah
53. Haggai
54. Zechariah
55. Malachi
(It should be noted that the three books of “Meqabeyan” are not identical with the books of “Macabees”, although there is a certain overlap regarding content.)
B. The holy books of the New Testament
The Gospels
1. Matthew
2. Mark
3. Luke
4. John
History
5. The Acts
The Letters of Paul
6. Romans
7. I Corinthians
8. II Corinthians
9. Galatians
10. Ephesians
11. Philippians
12. Colossians
13. I Thessalonians
14. II Thessalonians
15. I Timothy
16. II Timothy
17. Titus
18. Philemon
19. Hebrews
Other Letters
20. I Peter
21. II Peter
22. I John
23. II John
24. III John
25. James (called Jacob)
26. Jude
Prophecy
27. Revelation
Books of Church Order (based on the “Apostolic Constitutions” and the Epistles of Clement)
28. Sirate Tsion (The Order of Zion)
29. Tizaz (Commandments)
30. Gitsew
31. Abtilis
32. The I book of Dominos (The Book of the Covenant 1)
33. The II book of Dominos (The Book of the Covenant 2)
34. The book of Clement
35. Didascalia (TEACHING OF THE TWELVE APOSTLES AND DISCIPLES OF OUR SAVIOR – The Didascalia was clearly modeled on the earlier Didache)
The Ethiopic version of the Old and New Testament was made from the Septuagint. It includes the book of Enoch, Baruch, and the third and fourth Esdras. In the international Bible studies there are certain books belonging to the class usually designated pseudepigraphic. The whole Christendom and whole-learned world owes a debt of gratitude to the church of Ethiopia for the preservation of those documents.
Among these books is the book of Enoch which throws so much light on Jewish thought on various points during the centuries immediately preceding the Christian era. The book of Jubilee (Kufale, i.e. Division) otherwise known as the Little Genesis has also been preserved entire only in the Ethiopic version. The preservation of yet one more book in its entity, namely, the Ascension of Isaiah, is to be remembered to the credit of the Ethiopic Church.
It should be noted that the Ethiopic Church is very inclusive when it comes to what it considers Canon, and that changes based on circumstances. For example, the current printed version of the Ethiopic Bible has a total of 81 books, but they differ from the several listed “official Canon(s)” in that some books may be missing from the above list, but other books that are combined in this above list can be separated out, thus maintaining the total of 81 books.

Share | Tweet | Share | Pin It | +1 | print | email
Category: history
Disclosure of Material Connection: Some of the links in the post above are “affiliate links.” This means if you click on the link and purchase the item, I will receive an affiliate commission. Regardless, I only recommend products or services I use personally and believe will add value to my readers. I am disclosing this in accordance with the Federal Trade Commission’s 16 CFR, Part 255: “Guides Concerning the Use of Endorsements and Testimonials in Advertising.”