‘The Words of Strengthened Israel’ and Was Hebrews Written by Paul? Yes… by Dr. John David Pritcher, Jr., MD 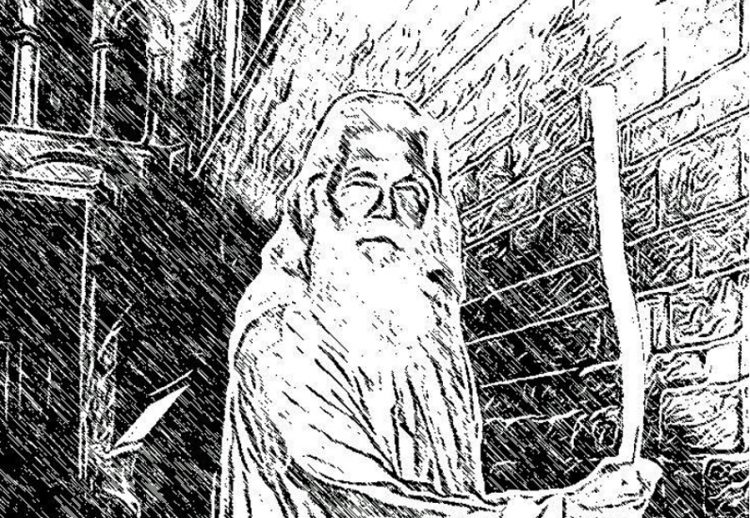 A guest post By John David Pitcher Jr., MD, from “The Oldest Midrash. The Identity of the Messiah”

Most of us like to look through family albums. How we have changed throughout the years! Many of us have gotten a few more wrinkles and gray hairs, not to mention that dreaded extra weight!

I’ve included in this article a sketch of my cousin Bill who reminds me of “Strengthened Israel” with his rod at the end of his days!

We know that God never changes and Hebrews 13:8 gives the same quality for the Messiah in a verse that is the favorite of many believers in Messiah:
“Yeshua the Messiah is the same yesterday, today, and forever.”

By giving the Messiah the attribute of being unchanging, the writer of Hebrews was making the point that God is the Messiah of Israel and of all Mankind.

Up until the eighteenth century theologians attributed the book of Hebrews in the New Testament to the Apostle Paul. Recently, with the discovery of a complete Jewish Midrash in six letters in the New Testament, one of which is Hebrews and all the rest are by Paul, once again we can be sure that Paul wrote Hebrews.

The book of Hebrews is a Midrash of the book of Genesis. Over 490 Greek words are used in sectional order from the 70 Rabbis’ translation of the Hebrew Scripture into Greek, the Septuagint, to form the framework of the Midrash.

Hebrews 13:4-12 (which includes the above verse describing the Messiah as unchanging) is a Midrash of Genesis 47:14-49:32. There are 15 different words common to each section of Scripture, used a collective total of 18 times in Hebrews 13:4-12 and 27 times in Genesis 47:14-49:32.
Paul “shot” from the Greek translation of the Hebrew Scripture in Genesis to give us Hebrews. Indeed, the word Torah comes from the Hebrew root word yarah meaning “to shoot an arrow”.

Where was Paul shooting from to say that “Yeshua the Messiah is the same yesterday, today, and forever”?

Let me show you that those words came from none other than Israel himself at the end of his days.

“Yesterday”
In Genesis 48:1 we are told that Joseph was told his father was sick and Joseph came to his father. “Israel strengthened himself, and sat on the bed.” (Genesis 48:2)
“Jacob said to Joseph, ‘God Almighty appeared to me at Luz in the land of Canaan, and blessed me.” (Genesis 48:3)
Israel recounts that in the past, God Almighty, El Shaddai had appeared to him.

“Today”
Israel’s eyes were dim at the end of his days and as Joseph brought his sons to his father to be blessed, you will recall that Israel kissed them, embracing them and said that he didn’t think he would see Joseph’s face let alone his offspring. Israel crossed his arms and said,
“The God before whom my fathers Abraham and Isaac walked, the God who has fed me all my life long to this day, the Angel who has redeemed me from all evil, bless the lads.”
Israel outlines how God had been with him to that very day.
“And Forever”
Jacob called to his sons and asked them to “Listen to Israel, your father.” (Genesis 49:2) He proceeded to bless each of his sons in the order of their birth. He gets to the blessing of Judah that includes,
“The scepter will not depart from Judah, nor the ruler’s staff from between his feet, until he comes to whom it belongs. To him will the obedience of the peoples be. Binding his foal to the vine, his donkey’s colt to the choice vine; he has washed his garments in wine, his robes in the blood of grapes. His eyes will be red with wine, his teeth white with milk.”
Israel foretells of the sacrifice of Messiah and the obedience of peoples to him. Descended from Judah he is King.

“Yesterday, Today and Forever”
Then in blessing Joseph, he includes all three with the verbs “were”, “is”, and “will” in Genesis 49:24-25:
“But his bow remained strong. The arms of his hands were made strong, by the hands of the Mighty One of Jacob, (from there is the shepherd, the stone of Israel), even by the God of your father, who will help you, by the Almighty, who will bless you, with blessings of heaven above, blessings of the deep that lies below, blessings of the breasts, and of the womb.”
Israel recounts that the Mighty One of Jacob, the Shepherd, the Stone of Israel, the God of Israel, the Almighty would continue to bless Joseph.

“The Words of Strengthened Israel”
The words of strengthened Israel are both historic and prophetic as told through Midrash by Paul in the letter to the Hebrews. Yeshua the Messiah appeared throughout the Genesis account as El Shaddai and the Angel of the LORD, and is the King, the Mighty One of Jacob, the Shepherd, the Stone of Israel, the God of Israel.

He is unchanging.
Have you trusted in the Messiah? He desires to be your Savior and Lord today. He died, washing his garments in blood taking your sins upon himself. Trust in him and declare that Yeshua is Lord (Jesus is the English translation of his name) and believe in your heart that God raised him from the dead and you will be saved. (Romans 10:9)