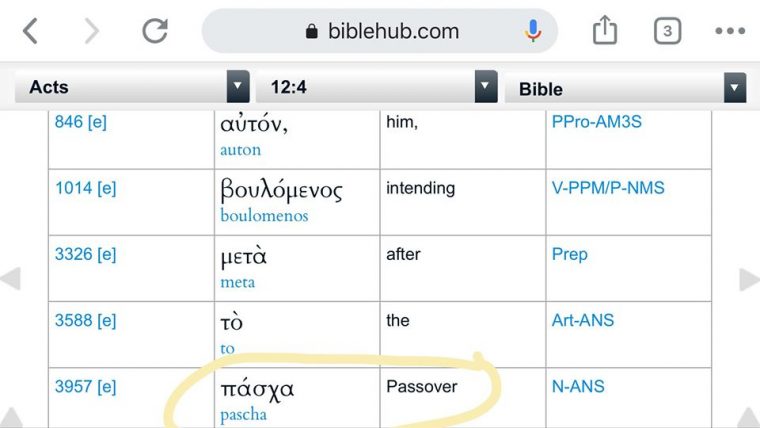 There is SO MUCH MORE, to the “Easter” story than you know! This is a tip toe into “the rest of the story…”
What the New Testament actually says about Easter Sunday, and how it reveals a much deeper, fulfilling and meaningful story and it’s convergence with:
1) A Jewish Holiday,
2) a special Holiday Sabbath, and
3) a rarely talked about weekly observance of “The Coming of Messiah, Light and Prayers of the Saints”
–which all COMBINE into an a SINGLE Day:
“RESURRECTION DAY!”
Background:
“…There are agenda translations in The Bible designed to support doctrines of men. I encourage you to research and go back to the original writings to discern… For example, Easter was purposely mistranslated from the word Passover to support Catholic doctrine and edicts outlawing anything deemed “Jewish” [during the 1st Counsel of Nicaea]. The name Easter only appears one time in The Bible and was not a celebration kept by the early believers in Jesus, until the Roman Catholic edicts outlawed the biblical Feast Days.
Acts 12:4 “And when he had apprehended him, he put him in prison, and delivered him to four quaternions of soldiers to keep him; intending after Easter to bring him forth to the people.”
(Look at the 1st image below and you will see the verse actually says Passover.)
Text:
Now let’s look at what the original manuscripts say about the Resurrection. Part of the confusion is the word “day” has has been added and the word “Sabbath” taken out when it actually says:
Mathew 28:1 “In the end [Greek: de] of the sabbath [Greek: sabbaton], as it began to dawn [Greek: epiphosko] toward the first day [the word “day” which is not in the Greek] of the week [the word translated as “first” is actually the Greek: sabbaton], came Mary Magdalene and the other Mary to see the sepulchre.” (KJV)
[This is saying that after the weekly Sabbath day, there is ANOTHER Sabbath Day]
According to Vine’s Expository Dictionary of New Testament Words, the Greek word shabbaton as used in Matthew 28:1, Mark 16:2, Acts 20:7,11 and 1 Corinthians 16:2 [al]though translated in the KJV as “the first day of the week” literally and idiomatically means, “one of the sabbaths” signifying “the first day after the sabbath.” (p. 810)
In this case the “first day” after the WEEKLY Sabbath is a GREAT Sabbath (Meaning it is a Biblical Holiday referenced in Leviticus 23. It is called “Great” because God commanded it’s observance, not man). [In this case the GREAT Sabbath the day after the Weekly Sabbath, begins the Feast of First Fruits at sundown Saturday evening.]”
An additional note that I (Tov) find interesting, is when the sun set on Saturday (The Weekly Sabbath), it also began a weekly celebration called Havdalah (maaning: separation), which anticipates and celebrates the coming of Messiah!
Just like Passover (this Havdalah, Holiday Shabbat, and Feast of First Fruits happen INSIDE of the 7-day Holiday of Passover), Havdalah is celebrated in each home, each family individually. It is a reminder that during the 1st Passover, each family observed individually, each home covered and saved by the Blood of a Lamb.
Havdalah incorporates:
1) the Light of 2 Candles intertwined (anticipating Jew and Gentile worshiping together)
2) Sweet Incense Spices (representing the prayers of those longing for Messiah)
‘Some of the verses read for Havdalah include:
Isaiah 12:2-3 (ESV)
2 “Behold, God is my salvation;
I will trust, and will not be afraid;
for the Lord God is my strength and my song,
and he has become my salvation.”
3 With joy you will draw water from the wells of salvation.
Psalm 116:13
I will lift up the cup of salvation and call on the name of the LORD.
This traditional prayer is recited:
“Behold, God is my savior, I will trust God and not be afraid, for my strong faith and song of praise for God will be my salvation. You will draw water joyously from the wellsprings of salvation. Salvation is the God’s; may Your blessing rest upon Your people. God of the heavenly armies is with us; the Lord of Ya’akov is a fortress protecting us. God of the heavenly armies, happy is the individual who trusts You. God, redeem us! The King will answer us on the day we call God. The Jews had light, happiness, joy and honor; may we have the same. I will raise the cup of salvation and call out in the name of the God.”
AND
When this Havdalah ceremony falls on a God-given Holiday, THIS Passover song is often sung, anticipating the coming of Messiah:
“Eliahu ha-navi, Eliahu ha-Tishbi, Eliahu ha-Giladi. Bimheira v’yameinu yavo eleinu, im mashiach ben David.
Translation: May Elijah the Prophet come to us, heralding the Messiah, soon and in our days!”
So, Even this Tradition of Havdalah was fulfilled by Jesus actually resurrecting on on the GREAT Shabbat of First Fruits, which most Christians in English call: Easter.
Happy Feast of First Fruits!
The Day Jesus rose from the dead to become the “First Fruits of the New Covenant between God and man!”
(1 Corinthians 15:20, Hebrew 9:15, 1 Corinthians 15:23, Romans 8:29)
“But in fact Christ has been raised from the dead, the firstfruits of those who have fallen asleep”
There are THREE (3) Sabbaths in a row during the first three days of Passover. God wants us to REST as part of our worship of him. This reflects the original meaning of Genesis 2:15, removing the niqudot (Masoretic notations, which they sometimes used to insert their own theology into the reading of the Hebrew Bible):
“And the Lord-Yehōvah (Messiah Pre-Incarnate) God-Elōhīm [The Creator] took the man, and put him (lit. caused him to rest) in [to] the garden of ‘Eden (bliss) to dress it and to keep it (lit. for Worship and Obedience).” (NMV)
(Note: Chief Joseph AmaHura RiverWind originally wrote the Greek word study part of this. I have edited it and expanded it to make a more in depth study)

Share | Tweet | Share | Pin It | +1 | print | email
Categories: Bible, church, history, israel, Jesus, jewish wedding, jews, Judiasm
Disclosure of Material Connection: Some of the links in the post above are “affiliate links.” This means if you click on the link and purchase the item, I will receive an affiliate commission. Regardless, I only recommend products or services I use personally and believe will add value to my readers. I am disclosing this in accordance with the Federal Trade Commission’s 16 CFR, Part 255: “Guides Concerning the Use of Endorsements and Testimonials in Advertising.”